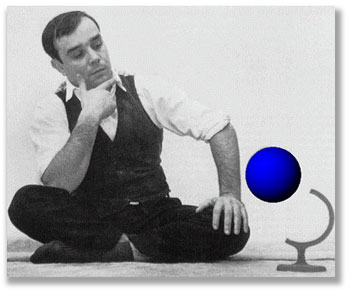 I discovered this artist by accident. I was in a bookshore and, while my head was interested in a book about Kandisky, my hand pick up a book about Klein.

I gave a look at the cover: it was blue, just blue, a blue that was attracting me in someway.

Yves Klein (28 April 1928 – 6 June 1962) was a French artist and is considered an important figure in post-war European art. New York critics of Klein's time classify him as neo-Dada, but other critics, such as Thomas McEvilley in an essay submitted to Artforum in 1982, have since classified Klein as an early, though "enigmatic," Post-Modernist.

During 1947-1948, Klein conceived his Monotone Symphony (1949, formally The Monotone-Silence Symphony) that consisted of a single 20-minute sustained chord followed by a 20-minute silence – a precedent to both La Monte Young's drone music and John Cage's silent 4'33". During the years 1948 to 1952, he traveled to Italy, Great Britain, Spain, and Japan. In Japan, at the early age of 25, he became a master at judo receiving the rank of yodan (4th dan/degree black-belt) from the Kodokan, which at that time was a remarkable achievement for a westerner. He also wrote a book on Judo called Les fondaments du judo. In 1954, Klein settled permanently in Paris and began in earnest to establish himself in the art world.
Monochrome works: The Blue Epoch
Although Klein had painted monochromes as early as 1949, and held the first private exhibition of this work in 1950, his first public showing was the publication of the Artist's book Yves: Peintures in November 1954. Parodying a traditional catalogue, the book featured a series of intense monochromes linked to various cities he had lived in during the previous years. Yves: Peintures anticipated his first two shows of oil paintings, at the Club des Solitaires, Paris, October 1955 and Yves: Proposition monochromes at Gallery Colette Allendy, February 1956. These shows, displaying orange, yellow, red, pink and blue monochromes, deeply disappointed Klein, as people went from painting to painting, linking them together as a sort of mosaic.
For his next exhibition at the Iris Clert Gallery (April 1958), Klein chose to show nothing whatsoever, called La spécialisation de la sensibilité à l’état matière première en sensibilité picturale stabilisée, Le Vide (The Specialization of Sensibility in the Raw Material State into Stabilized Pictorial Sensibility, The Void): he removed everything in the gallery space except a large cabinet, painted every surface white, and then staged an elaborate entrance procedure for the opening night; The gallery's window was painted blue, and a blue curtain was hung in the entrance lobby, accompanied by republican guards and blue cocktails. Thanks to an enormous publicity drive, 3000 people were forced to queue up, waiting to be let in to an empty room.
Anthropométries
Despite the IKB paintings being uniformly coloured, Klein experimented with various methods of applying the paint; firstly different rollers and then later sponges, created a series of varied surfaces. This experimentalism would lead to a number of works Klein made using naked female models covered in blue paint dragged across or laid upon canvases to make the image, using the models as "living brushes". This type of work he called Anthropometry. Other paintings in this method of production include "recordings" of rain that Klein made by driving around in the rain at 70 miles per hour with a canvas tied to the roof of his car, and canvases with patterns of soot created by scorching the canvas with gas burners.
Klein and Arman were continually involved with each other creatively, both as Nouveaux Réalistes and as friends. Both from Nice, the two worked together for many years and Arman even named his son, Yves Arman after Yves Klein who was his god-father.
Sometimes the creation of these paintings was turned into a kind of performance art—an event in 1960, for example, had an audience dressed in formal evening wear watching the models go about their task while an instrumental ensemble played Klein's 1949 The Monotone Symphony (a single 20-minute sustained chord followed by a 20-minute silence).
In the performance piece, Zone de Sensibilité Picturale Immatérielle (Zones of Immaterial Pictorial Sensibility) 1959-62, he offered empty spaces in the city in exchange for gold. He wanted his buyers to experience The Void by selling them empty space. In his view this experience could only be paid for in the purest material: gold. In exchange, he gave a certificate of ownership to the buyer. As the second part of the piece, performed on the Seine with an Art critic in attendance, if the buyer agreed to set fire to the certificate, Klein would throw half the gold into the river, in order to restore the "natural order" that he had unbalanced by selling the empty space (that was now not "empty" anymore). He used the other half of the gold to create a series of gold-leafed works, which, along with a series of pink monochromes, began to augment his blue monochromes toward the end of his life.
Aero works

Klein is also well known for a photograph, Saut dans le vide (Leap into the Void), originally published in the artist's book Dimanche, which apparently shows him jumping off a wall, arms outstretched, towards the pavement. Klein used the photograph as evidence of his ability to undertake unaided lunar travel. In fact, "Saut dans le vide" was published as part of a broadside on the part of Klein (the "artist of space") denouncing NASA's own lunar expeditions as hubris and folly.
Klein's work revolved around a Zen-influenced concept he came to describe as "le Vide" or in English: the Void. Klein's Void is a nirvana-like state that is void of worldly influences; a neutral zone where one is inspired to pay attention to ones own sensibilities, and to "reality" as opposed to "representation". Klein presented his work in forms that were recognized as art - paintings, a book, a musical composition - but then would take away the expected content of that form (paintings without pictures, a book without words, a musical composition without in fact composition) leaving only a shell, as it were. In this way he tried to create for the audience his "Zones of Immaterial Pictorial Sensibility". Instead of representing objects in a subjective, artistic way, Klein wanted his subjects to be represented by their imprint: the image of their absence. Klein's work strongly refers to a theoretical/arthistorical context as well as to philosophy/metaphysics and with his work he aimed to combine these. He tried to make his audience experience a state where an idea could simultaneously be "felt" as well as "understood".
Multiples
As well as painting flat canvases, Klein produced a series of works throughout his career that blurred the edges between painting and sculpture. He appropriated plaster casts of famous sculptures, such as the Winged Victory of Samothrace and the Venus de Milo, by painting them International Klein Blue; he painted a globe, 3D reliefs of areas of France and dowls which he hung from the ceiling as rain; He also stuck sponges to canvases and painted dinner plates. Many of these works were later manufactured as editioned multiples after his death.
In Blue Obelisk, a project that he had failed to realise in 1958, but that finally happened in 1983, he appropriated the Place de la Concorde by shining blue spotlights onto the central obelisk.
He suffered a first heart attack whilst watching the film Mondo Cane at the Cannes Film Festival on 11 May 1962. Two more heart attacks followed, the second of which killed him on 6 June 1962. His son, Yves, was born a few months later in Nice.
Posted by eterogeneo at 11:06