Yesterday night Eivind Aarset played an amazing gig at the Casa del Jazz in Rome with his trio, so here are my impressions. 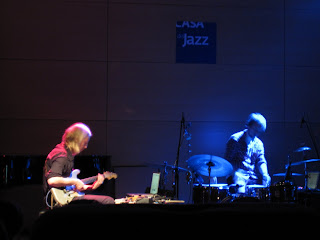 The band played the last Eivind Aarset album, "Sonic Codex" and some previous Eivind's songs.
Eivind Aarset: el. guitar & electronics
Audun Erlien: bass
Vetle Holte: drums
The ensamble sounded great. Eivind has a distinctive sound on his guitar: from a very ligh and impalpable sound to a livid distortion guitar sound.
His soundscapes are so light and beautifull that I felt like my body was floating...
He played an electric guitar and a lot of other electronic stuff, mangling effects with his hands and feet continuously. It was a mix of jazz, rock, ambient, experimental music...it's hard to define.
He was sitting on the left of the stage, so he can saw the band and give some sort of "commands" and rarely looked at the audience: he was completely concentrated on his performance and did a great job !
In particular, I've enjoined the "feel" of the band: in fact, the bassist and drummer were great, following perfectly Eivind in the crescendo and diminuendo of music.
The venue has a fantastic sound system, so the global sound was great, even better than CD.
One interesting thing I noticed is that at the end of the gig, Eivind come out on the stage and started unplugging his gear. Usually renowed artists like Eivind have a staff doing this boring work...so my imppresion was that he don't want others to put their hands on his gear...and I can see why...
Here's some pictures of his gear: 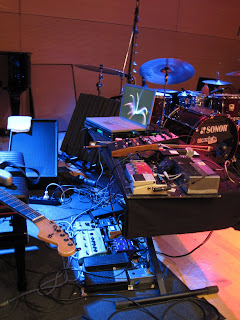 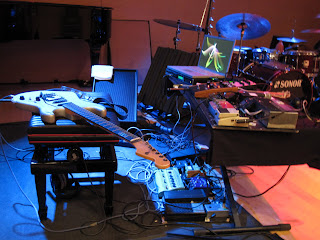 When I talked to him, he looked a shy guy, but I had the impression he was happy when I asked for a photo of him sitting in front of his gear. 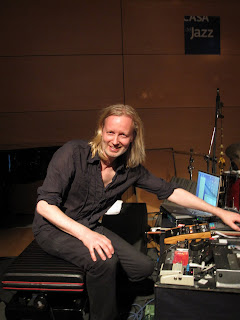 For those who are looking for new sounds I strongly raccomend this artist !