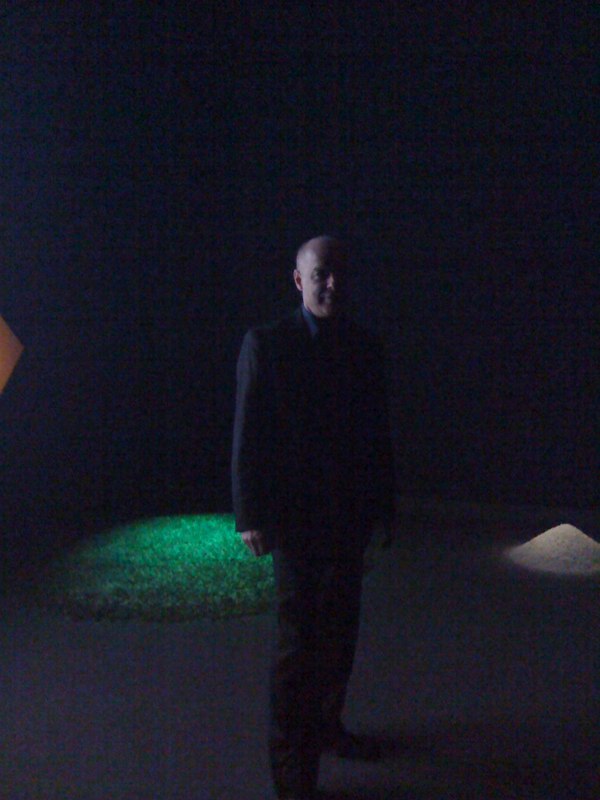 Here is an excerpt from the speech Brian Eno made at the press conference, held the 20th february, 2009 in Palazzo Ruspoli. It’s not the complete transcription, cause of the bad recording I made, but I think it gives a clear idea about his work. He also talked about the double symmetry he used for the installation (look at the screens, sand and colors) and about the apparent spinning movement given by the “unstable” position adopted for the monitors.

“ I started something about twelve years ago with some friends of mine, which is called the “The Long Now Foundation”. So what we try to think about is the time period from now and ten thousand years from now. And we appealed it "The Long Now". What that expressions means is that what we’re doing at this moment has effect for a very long time in the future. So we can’t really think at the future as a different place, we can think at the future like a form of the now.
When I was thinking about the idea of Futurism before coming to the show, I was thinking that the concept belongs to the early twenty century, it belongs to a time where you could think that the future had no connection, where was possible to imagine a future with no connection to the present.
It was an era of revolutionary manifestos; an era when people thought: “we can start again, we can start from zero”. For example, the russian revolution happened, the first revolution had happened in 1906 - just before the Futurism manifesto - and the second revolution was coming in 1917. And the conception in both those revolutions and revolution that happened in Germany and the fascist revolution, the conception in all of us was: “we can start history once again”.
Now that idea - apart from a few idiotic newcomers that still believe it - that idea is clearly no longer available. It’s not longer possible to imagine that we could start form nothing.
So what we are really looking at is the idea that where we are has very long roots into the past and very long brunches into the future. So the model we are working with - I believe - in our head is not a revolutionary model but a radical evolutionary model.
It’s very interesting: if you go to the fantastic futurism exhibition at the “Scuderie del Quirinale”, which I went to last night - that amazing exhibition has a lot of fantastic paintings the best futurism paintings - and when you look at them now, you can see they belong to the ninety century in many respects. They look like “paintings”. Until you get interested in the english painter Bomberg: suddenly it look like it belongs to the twenty century.
So I think what often happens with movements is that they don’t subtly start or subtly end: there's a very soft cross-fade, and so any moment there are many many different processes existing. So history is never in one place, it’s always in thousands of places at the same time.
What I think it’s happening with this work or kind of idea is... I think one of the interesting matter is a different kind of respect for the audience.
Perhaps because I come from pop music as much as fine art: I care very much the audience has a comfortable experience. I want to make a place where people can stay for hours, if they want to, and sometimes that’s what happened. Sometimes people do stay for hours.
So what I’m saying to people is that I don’t know if it’s theatre, if it’s art or interior design, or some kind of circus, I don’t really know where it fix in the picture of our culture. And I don’t want to create something that forces people to think about it in a particular way.
I recently had an experience in Norway. I was walking in the street, after the show, and four very old ladies come up to me: “Oh, you are the artist who made the show ? We are bringing our friend along because we think she should have something like this in her living room”.
I felt like it was a real success. And then, not long afterwards, a couple of young punks, with very spiky hair, came up to me and said: “Hey, cool, cool...”. So I like the fact that this art is very inclusive.
The idea of the show came along in a good time for me. Because it makes me think again about a subject I’m most interested in. Which is the subject of how we deal with time.
So I’m interested - as I said before - in the idea of a very long period of time (ten thousand years), but I’m also interested in subjective personal time. And one of the things interested me about the shows as an artist, is that people can change their sense of time. So very often you hear people say: “oh it’s terrible trying now to make art, because people have such a short attention path. So when you watch television and see films you get something every second. Because it’s assumed that people need a lot of stimuli.
I think my work proves that it’s completely untrue.
I think if you make a situation where you invite people to slow down, they had desperate need to do it, they’ll loved to do it. because everything else surround our life is that every nanoseconds counts. You have to worry all the time.
What this works says, I think, is: loose control for a little bit, surrender.
And to me “surrender” is my second favorite subject."
Installations pix here:
http://www.eterogeneo.com/Gallery/Pages/Presentism-Brian_Eno.html
Posted by eterogeneo at 10:38